The small village of Chaudes-Aigues, Chaudas Aigas in Occitan (literally “Hot water”) in the Cantal region in south-central France, is known since the Ancient History for its thirty hot springs with temperatures ranging from 45°C to over 80°C. The village is home to the hottest spring across Europe: the Par spring with a water temperature of 82°C.

Pools and remains of thermal establishments were found during archaeological digs around the Par source, suggesting the use of hot water from the Ve century and maybe earlier. The village is also known to have been an important therapy centre during the Middle Age. 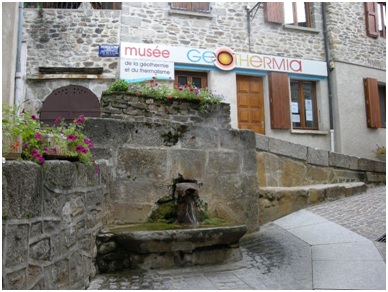 From 1332, private individuals appropriated the different sources, including the Par spring, to create the first know geothermal house heating system in the world. This system used wooden pipes to collect the natural hot water before it circulated under the flagstones of a few houses using only gravity as the sources were located mostly upstream of the village. Thereafter, the heating system was extended to the entire village and every household had access to hot water using a sort of sink. A regulation was introduced from the XIXe century to avoid hot water supply issues, which were mostly encountered downstream of the village at the time. In 1854, the access to hot water was thus control throughout the village by forbidding private use and building nine public fountains [1]. To this day, the heating system is operational and is distributed to more than a hundred houses. The water is used in the summer to supply the municipal pool and all year long to supply thermal baths and the fountains of the village.

Several hypothesis have been formulated to identify the geological and structural context for such geothermal emergences in the volcanic context found in this region. Studies have shown that the hot waters found in Chaudes-Aigues which is of sodium bicarbonate type, acquire their mineralisation in metamorphic formations and emerge in favour of tectonic accidents such as fractures, faults and microgranite and quartz veins. From the analysis of the isotopic composition of carbon dioxide, it is also possible to say that the CO2 present in the water originates from deep metamorphic formations [2].